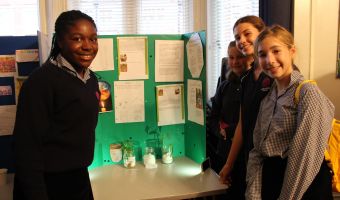 The year 8 pupils exhibited their science fair projects. It was a jolly celebration of all aspects of science, with teachers and parents impressed by the range of projects and the confidence with which they were explained.

The pupils were asked to choose a subject they were interested in and design a fair test around this topic. There were several projects about food - which chocolate melts fastest? Does the amount of sugar in soft drinks affect the pH? Which bread stays fresh (not mouldy) the longest? Why does an egg float in salt water? There was even a dramatic explanation of the digestive system! There were classic “explosion” projects, with a vinegar and baking powder volcano and mentos and Coca Cola fountains.

Many projects were influenced by the pupils’ independent interests – astronomy, fossils, and fireworks. The judges were looking for originality, creativity, and sound scientific method. It was very hard to award the prizes, but at the end of the evening three winners stood out clearly. Third prize and prize for promotion of a sustainable lifestyle went to Taiza, Maya, Sophie, and Tallulah for their investigation into global warming and plant growth. Second prize and prize for creativity went to Amelie and Esme for their investigation into the best type of oil/soda drink and effervescent tablet made the best lava lamp.

The project that won first prize impressed the judges with its systematic use of scientific method to investigate an important aspect of their hockey hobby: how far to lift the stick in order to hit the ball on different surfaces. It was wonderfully executed – Alix and Ana had carefully crafted a simple, but excellent project. They were aware of the strange results that they would need to repeat: they had found the means of more than one trial and they had plans for further investigations.

We were all incredibly proud at the depth of thought, creative thinking, and perseverance to work on these projects with only the slightest help from teachers. It is our hope that all pupils felt they had achieved something. The completion of a project – which might seem daunting at first – is extremely satisfying and enjoyable, especially when you’ve chosen a subject of interest.

More House School is committed to safeguarding and promoting the welfare of children and expects all staff and volunteers to share this commitment.